Seton Hill musical theatre student Elena Falgione hopes to someday make it to Broadway, but first, she tackled the stage at Carnegie Music Hall in Pittsburgh.

Falgione, a senior from Glenshaw, Pa., was named Second Runner Up at Campus Superstar, an “American Idol” style singing competition sponsored by The Edward and Rose Berman Hillel Jewish University Center of Pittsburgh. The event was held March 26.

Falgione was the first Seton Hill student to even make it to the semi-finals of Campus Superstar. More than 100 Pittsburgh area college students auditioned for the competition.

As one of 10 finalists in the live competition, Falgione said she was proud to represent Seton Hill, her fellow students, faculty and staff. 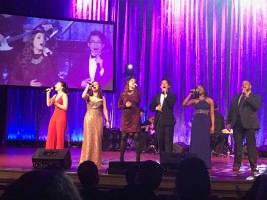 “It was truly an amazing experience. I can't stop gushing about it. The experience of performing in Campus Superstar is one I won’t soon forget,” Falgione said. “I encourage my talented peers to take their shot at it as well. I hope I can pave the way for a Seton Hill Superstar eventually.”

"Elena has worked hard during her time at Seton Hill to build her skills as a performer,” said Kellee Van Aken, Associate Professor of Theatre and Theatre and Dance Program Director at Seton Hill. “Through voice lessons, dance classes and performance opportunities in musicals and plays she has challenged herself to do better. Being awarded Second Runner Up at Campus Superstar is a testament to her dedication to her art and determination to share her considerable gifts with an audience.”

In its 11th year, Campus Superstar is a professionally-produced musical spectacular where performers are accompanied by a full band.

Falgione began her quest to compete last fall when she submitted a video of a performance she had done at Longwood Retirement Community. The piece was the song “Lying There” from “Edges,” a show she had performed in during her freshman year at Seton Hill.

The audition tape put Falgione into the semi-finals, where she performed “Speechless” by Lady Gaga. During Sunday’s finals, Falgione performed “Defying Gravity” from the musical “Wicked.”

Falgione began dancing at the age of four, though voice lessons in first grade led her to find her true passion in singing.

As a second grader, she took the stage in her first musical, playing Tinkerbell in “Peter Pan.” She has been performing ever since.

At Seton Hill, Falgione has been cast in eight main stage shows. When she’s not performing, she is involved in costume design. Her favorite roles have been Lilith in "She Kills Monsters," Nick Bottom in "A Midsummer Night's Dream," Charity Hope Valentine in "Sweet Charity." She is looking forward to performing the title role in “Medea,” which opens March 31 at the Seton Hill Performing Arts Center.