Seton Hill University made an estimated $116.8 million impact on the Pennsylvania economy and produced more than 1,000 jobs in 2018, according to a study released by the Association of Independent Colleges and Universities of Pennsylvania.

Seton Hill’s impact increased by more than $46 million since the last AICUP economic impact study was released in 2016. That study showed Seton Hill contributed $70.5 million in 2014.

“The AICUP study confirms that Seton Hill University – along with other independent colleges and universities - continues to make a profound economic impact locally, regionally and statewide,” said Seton Hill President Mary C. Finger. “Over a four-year period, Seton Hill’s economic impact has increased by more than $46 million, which is a testament to the university’s continued growth. Since 2014, Seton Hill has increased enrollment, added additional academic and residential facilities and expanded its academic offerings, including new majors in Cybersecurity and Nursing. This growth – both on our hilltop campus and in our downtown Greensburg facilities – continues to drive the expansion of the economy in Greensburg and beyond.”

The study, which was conducted by Parker Philips, Inc., a nationally recognized consulting firm specializing in economic impact analysis, considered the direct spending on operations, wages and benefits, and capital projects by Seton Hill University and the estimated increase in demand for goods and services in industry sectors that supply or support the University. The study also measured the effect of student and visitor spending and the induced effect of increased household income.

According to the study, Seton Hill University supports and sustains 1,009 jobs. This includes:

The study also calculated tax revenues generated by this economic activity including sales tax, property tax, personal income tax, and corporate income taxes. The study concluded that Seton Hill University generates about $5.4 million in tax revenues annually for the Commonwealth of Pennsylvania and for local governments.

Beyond this direct economic impact, Seton Hill University is embedded in the community in a variety of ways, such as:

Statewide, AICUP member schools contributed more than $24 billion to the Pennsylvania economy. A brochure containing the major findings in the report is on AICUP’s website.

The Association of Independent Colleges and Universities of Pennsylvania (AICUP), the only statewide organization that serves exclusively the interests of private higher education within the Commonwealth, exists to complement and support the work of campus leaders.  With a membership of more than 90 private colleges and universities within Pennsylvania, the Association provides a variety of services and programs tailored specifically to the needs and situation of independent higher education.  A list of AICUP’s member colleges and universities is included on its website at www.aicup.org. 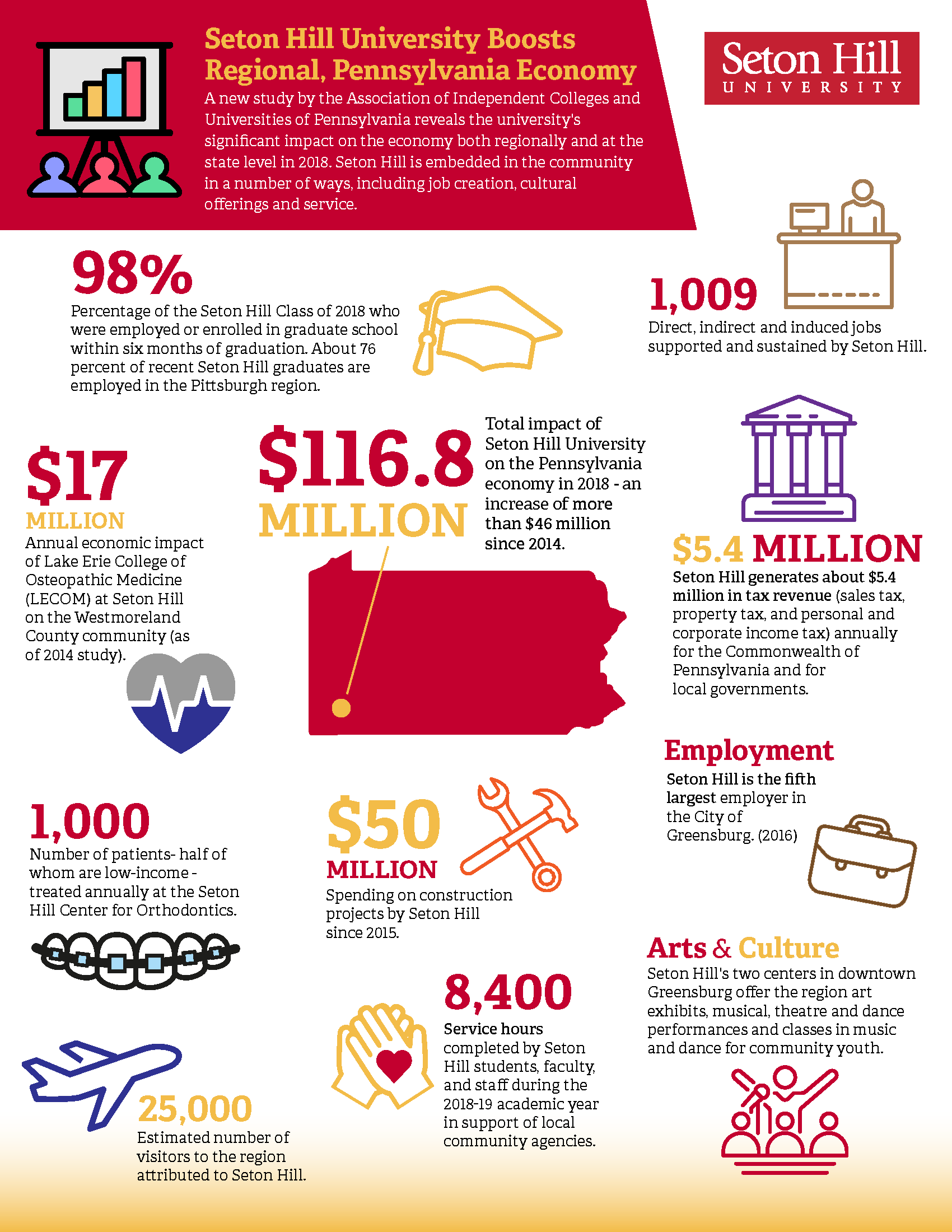 Click on the image to view a larger version of this infographic.