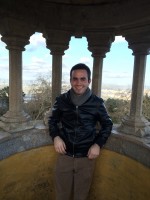 Seton Hill student Anthony Palmiscno had never traveled outside of the United States before his freshman year of college.

But his three-week trip to Spain as part of a Seton Hill class started Palmiscno on a path that has culminated with him receiving a Fulbright English Teaching Assistant (ETA) Grant to Spain.

“It is a tremendous honor to receive this competitive Fulbright English Teaching Assistant Grant,” said Palmiscno, 22, a Spanish and education major from Avonmore, Pa. “I look forward to spending the upcoming school year in Spain both teaching students and learning about them and their country and culture. I expect this experience will make me a better educator and global citizen.”

"Anthony Palmiscno is an outstanding young man whose commitment to learning from other cultures has made him a great ambassador for Seton Hill University,” said Seton Hill President Mary C. Finger. “Anthony’s sense of adventure, his love of learning, and his willingness to share his passions with others as a teacher make him extremely deserving of this prestigious honor by the Fulbright program.”

"During my freshman year at Seton Hill, I had the opportunity to travel to Spain for a three-week class during the May term. I fell in love with Spain, and the people and the culture.”

Palmiscno, the son of Angie and Brian Palmiscno, will be the first in his family to receive a bachelor’s degree when he graduates from Seton Hill in May. He is currently completing his student teaching at Peters Township High School in Peters Township, Pa.

Ultimately, Palmiscno hopes to complete doctoral studies and teach at the college level.

Palmiscno said his interest in the Spanish culture and language started while he was a student at Kiski Area School.

“I just seemed to be able to easily absorb and understand the language,” he said. “Then, during my freshman year at Seton Hill, I had the opportunity to travel to Spain for a three-week class during the May term. I fell in love with Spain, and the people and the culture.”

Palmiscno spent the spring semester of his junior year studying abroad at the University of Seville in Seville, Spain.

“I completely took advantage of the five months I spent in Seville, traveling throughout Spain and other areas of Europe, including Germany, Austria and Portugal,” Palmiscno said. “I decided then I wanted to go back someday and continue to see more of the world, and the Fulbright Grant gives me that opportunity.”

During his time in Madrid with the Fulbright program, Palmiscno will serve as an assistant teacher, helping students with their English as well as other areas of study. He will also serve as advisor for the school’s Model United Nations program.

As part of his Fulbright application, Palmiscno had to propose an extracurricular activity he would like to participate in during his time in Spain.

Palmiscno, who plays trumpet, organ and piano and serves as organist at Vandergrift Presbyterian Church, proposed putting his musical talents to use.

“I expect to perform in churches throughout Madrid as well as in street musical ensembles,” Palmiscno said. “I also hope to perform in a processional band during Holy Week next year, as religious processions are very popular in Spain.”

A member of St. Ambrose Parish in Avonmore, Palmiscno has been active during his time at Seton Hill as president of the Spanish Club, a student government representative, a member of the Education Club, a member of the Honors Council, a Griffin Guide, a Student Ambassador and a member of the Alpha Lambda Delta Honor Society.

About the Fulbright Program

The Fulbright Program is the flagship international educational exchange program sponsored by the U.S. government and is designed to increase mutual understanding between the people of the United States and the people of other countries. The primary source of funding for the Fulbright Program is an annual appropriation made by the U.S. Congress to the U.S. Department of State, Bureau of Educational and Cultural Affairs. Participating governments, host institutions, corporations, and foundations in foreign countries and in the United States also provide direct and indirect support. Recipients of Fulbright grants are selected on the basis of academic or professional achievement, as well as demonstrated leadership potential in their fields. The Program operates in over 160 countries worldwide.