Ask Seton Hill University Director of Maintenance and Grounds Bill Vokes how he’s doing, and his answer is always the same: “I’m living the dream.”

Whether it’s a 2 a.m. emergency phone call about a boiler breakdown or a 2 p.m. meeting planning for a large campus event, Bill Vokes’ calm, steady demeanor and his willingness to always help improve Seton Hill have been a constant presence since his first day of work on October 16, 1968.

Those traits that have been recognized by a half-century of students, faculty staff at Seton Hill are now being noticed nationally as Bill Vokes has been named the winner of the 2018 Maintenance Hero Contest, sponsored by American Time, a market leader in integrated time solutions. The award was announced by American Time today.

“Seton Hill is celebrating the Centennial of its founding as a four-year college in 2018, and it’s extraordinary that Bill Vokes has served our campus for 50 of our 100 years,” said Seton Hill President Mary C. Finger, Ed.D. “Bill has made Seton Hill his life's work, and although the physical improvements to our facilities and grounds showcase Bill's amazing abilities, it is his service to others, particularly our students, that resonates with everyone on campus. Bill is most deserving of the Maintenance Hero award."

“Bill Vokes is an amazing leader at Seton Hill, and, more importantly, an outstanding person,” said Jennifer R. Lundy, Vice President for Finance and Administration and CFO. “Bill’s devotion to Seton Hill – and especially to its students - knows no limits. Generations of students have been incredibly lucky to have such a humble, gracious man on our campus for the past 50 years.”

“It is truly, truly an honor to receive this award, and I appreciate all of the people at Seton Hill who nominated me,” Vokes said. “It’s an award for all of us in the Maintenance and Grounds Department. I have a good relationship with my guys, and we all work as a team, and that’s really the key to getting everything done is working as a team. I would be nobody if I didn’t have the people I’ve had.” 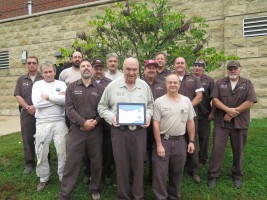 In his 50 years at Seton Hill, Bill has worked for five of the institution’s 10 presidents. He has seen the campus nearly double in the number of buildings – and been part of the team that saw many of those projects to fruition. He’s watched Seton Hill grow from a single-sex college to a co-educational university. And he’s seen the expansion of sports and with it new athletic fields and facilities to maintain.

Bill began his career at Seton Hill on October 16, 1968. He was 17 years old at the time and working construction when his brother-in-law, who worked at Seton Hill, recommended him for a job in the custodial department.

He did general cleaning, mopping and buffing of floors at what was then an college.

Bill would soon add paint crew to his job description – cleaning in the mornings and painting in the afternoons. Then came a stint as an electrician, his work leading the grounds crew, and then 27 years working in the boiler plant.

By 2004, Bill had done just about every job in the Maintenance and Grounds Department at Seton Hill – except carpentry.

In 2004, he was asked to take over the department on a temporary basis while administrators for a new permanent director – they found one in Bill Vokes.

Vokes was nominated for the Maintenance Hero award by 16 members of the Seton Hill community, who all raised similar themes about his commitment to the university and his generosity of spirit. 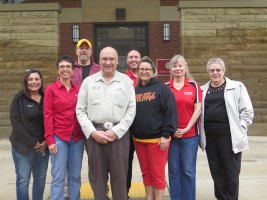 One said he seems to have a magic wand that just makes things happen. Others said they never fear driving up the steep hill to campus on snowy days because they know Bill and his team will have it better than the public roads. Several mentioned the lovely greeting he gives to students, faculty staff alike. “Hello, friend,” he’ll say.

Another submission for Vokes read, “Bill would just say he’s doing what’s right. I will say he does what is right with love."

One nominator told a story that is typical of Bill Vokes and his can-do attitude. When students in wheelchairs could not access a building, Bill and his team installed cement pavers overnight so they could safely be pushed to another entrance, and he scheduled one of his own staff members to assist the students for the entire semester.

Many mentioned Vokes’ recent health challenges. A heart attack earlier this year led to hospitalization and surgery and what should have been time off work. But Vokes always had his cell phone and iPad nearby, ready to field calls and emails and mobilize his team wherever they were needed. Even from his hospital bed, he monitored May’s commencement exercises, because he was disappointed that he would miss seeing “his students” walk across the stage.

“Always take care of the students,” Bill said. “The students are the No. 1 priority.”

As the grand prize winner of the Maintenance Hero contest, Vokes earned $3,000 in American Time product credit for Seton Hill University. The contest was open to any organization in any industry – private, public, nonprofit, educational or others – that wished to nominate a valued maintenance professional who routinely goes above and beyond in the workplace but receives little recognition for their efforts.

Seton Hill University, located in Greensburg, Pa., is a leading Liberal Arts university founded by the Sisters of Charity of Seton Hill. Celebrating the Centennial of its charter as a four-year institution of higher education in 2018, Seton Hill educates 2,200 students from 49 states and territories and 22 foreign countries on its hilltop campus 30 miles from Pittsburgh, Pa. Seton Hill offers academic programs at the undergraduate and graduate levels in the Natural and Health Sciences, Business, Education and Applied Social Sciences, Visual and Performing Arts and the Humanities. For more information, visit www.setonhill.edu.

From timekeeping systems for the largest corporations in the world to a presence in half of the K-12 districts in the U.S., American Time is the recognized leader in the manufacturing of integrated, custom timekeeping and notification systems. It offers the EverAlert communication and emergency notification system for schools, Wi-Fi network clocks, Power over Ethernet (PoE) clocks, battery digital clocks, as well as a master controller clock with the ability to run on a wired system concurrently with a new wireless clock system. For more information, visit www.american-time.com.