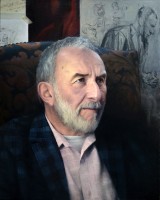 Seton Hill University Associate Professor of Art David Stanger has been selected to have his work displayed at the BP Portrait Award 2017 exhibition at the National Portrait Gallery in London, England this June.

Stanger’s piece, a 16” by 20” portrait of Jerome Witkin, his undergraduate art professor at Syracuse University, was one of 53 portraits selected from among 2,580 entries from 87 countries to the exhibition, which honors the best international works of portraiture. He is one of six United States based artists selected for the exhibit.

“I am absolutely elated to have my work chosen for the BP Portrait Award exhibition,” said Stanger, a Monroeville, Pa. native who now lives in the Squirrel Hill neighborhood of Pittsburgh. “It gives me confidence, and it puts wind in the sail. Doors have opened for many artists who have been in this exhibition, so it’s really exciting.”

“All of us at Seton Hill are thrilled at David Stanger’s international recognition through the BP Portrait Award exhibition,” said Seton Hill University President Mary C. Finger, Ed.D. “As a working artist as well as a professor, David serves as an excellent example to his students of what they can accomplish in the art world someday.”

“David’s beautiful work is well-deserving of this tremendous international honor, and we are fortunate to have someone of his talent on our faculty at Seton Hill,” said Curt Scheib, chair of the Division of Visual and Performing Arts. “David is passing on his passion for art to a new generation of students, just as his own mentor did for him.”

Stanger’s piece is an oil on canvas portrait of Witkin, his former art professor and mentor at Syracuse, where Stanger earned BFA in painting. Stanger also holds an MFA from the Hoffberger School of Painting at Maryland Institute College of Art.

Stanger traveled to Syracuse in the summer of 2015 and spent 2 ½ days in studio session with Witkin. He worked on the piece over the next several months, completing it in spring 2016.

“Working in his home studio, Jerome and I talked for hours,” Stanger said.  “When we were silent, his eyes fixed on his own work in progress.  That is that state in which I’ve chosen to depict him, in deep reflection.”

“This piece is very much about my relationship with Jerome, but it is also a timely summation of my thoughts as a painter.  At its best, portraiture shows us both the sitter and the artist, a commingling of lives, fixed in paint."

Stanger decided to enter this portrait over his other works because of its meaning to him. “This painting provided an opportunity for me to reconnect with him, honor him and credit him for shaping my life as a young artist.”

Stanger, who joined the faculty at Seton Hill in 2008, will travel to London in June with his wife, Susheela Nemani-Stanger and their son, Ravi, for the opening of the exhibit.

He hopes this accomplishment will help to inspire his students in his studio arts courses at Seton Hill as Witkin did for him.

Stanger’s work has been exhibited regionally and nationally at such venues as the Carnegie Museum of Art, the Mattress Factory, the Butler Institute of American Art and the Westmoreland Museum of American Art, as well as Manifest Gallery, Seraphin Gallery, and the University of North Carolina at Asheville. His work can be found in many private collections and is most notably in the collections of the Carnegie Museum of Art.

“It’s important for my students to see I’m a professional artist and that I’m out there working,” Stanger said. “They can learn things implicitly through that process.”

For more information about Stanger’s work, visit his website.