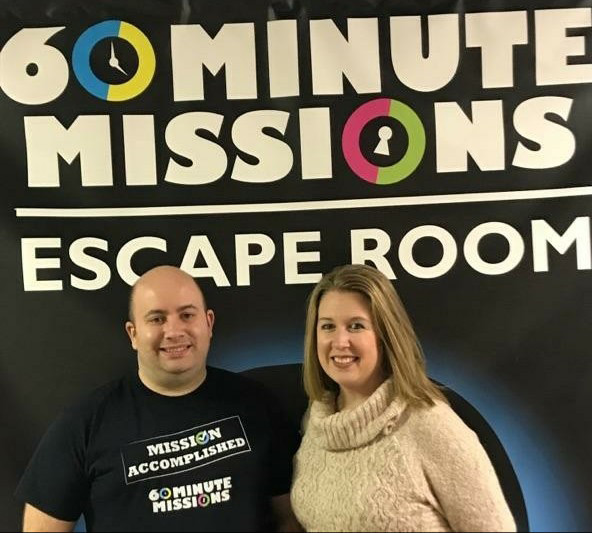 “What is there that’s fun to do in Greensburg?” was the topic of conversation between Vandye Nelson and Brian McCollum in the summer of 2016. The two friends met during their time at Seton Hill University, where Vandye majored in business with a focus in human resources and accounting, and Brian majored in computer science. Brian, a fan of solving puzzles and riddles, convinced Vandye to participate in an escape room. The two signed up to be “locked” in a room and were given an hour to solve various puzzles to crack the code and escape.

“Seton Hill gave me the opportunity to be involved in a lot of things, and I realized I could flourish in that type of environment.”

After that experience, they talked about how fun it would be to be a puzzle designer for an escape room. At that point, Brian said they both had the same thought: “We could do this.” If they opened one in Greensburg, they could tap into the college market and be close to their alma mater. In the end, that’s exactly what they did. Vandye and Brian opened 60 Minute Missions, an escape room located at 116 East Pittsburgh Street, Greensburg, PA.

During their time at Seton Hill, 2000 to 2004, both were involved in various activities on campus. Vandye was a resident assistant and, during her senior year, class president. She talked about how Seton Hill helped her “build relationships… and a sense of community.” Brian was the first male president of Seton Hill Government Association (SHGA), and was also the first to serve Seton Hill University.  (Seton Hill transitioned from a women’s college to a fully coeducational university in 2002.) Now, Brian works for Concurrent Technical Corporation. In 2012 he started Pittsburgh Restaurant Week, and most recently, in 2016, launched 60 Minute Missions with Vandye.

Brian credits Seton Hill with helping him balance multiple activities at once. “Seton Hill gave me the opportunity to be involved in a lot of things, and I realized I could flourish in that type of environment,” Brian said. The two are still connected with their alma mater via the Griffin Advantage Program, which provides discounted prices for 60 Minute Missions to Seton Hill students.