Keynote speaker for the conference is Holocaust scholar Wendy Lower, author of “Hitler’s Furies: German Women in the Nazi Killing Fields,” and John K. Roth Professor of History and George R. Roberts Fellow and Director of Mgrublian Center for Human Rights at Claremont McKenna College. The NCCHE will also present Victoria Barnett, Director of the U.S. Holocaust Memorial Museum’s Programs on Ethics, Religion and the Holocaust, with the Nostra Aetate Award. While the conference is open to registered attendees only, both the keynote address by Wendy Lower and the Nostra Aetate Award presentation are open to the public.

When: Wendy Lower’s presentation, “Perpetrator Behavior: Lessons from the Holocaust" will take place at 7:30 p.m. on Sunday, October 21 at the Seton Hill University Performing Arts Center along Harrison Avenue in downtown Greensburg.

On Monday, October 22 at 7:30 p.m., Victoria Barnett will receive the Nostra Aetate award and will speak on the topic “Women's Interfaith Activism and Resistance: A Case Study from the Holocaust" in Cecilian Hall, located on the second floor of the Administration Building on Seton Hill’s hilltop campus.

Wendy Lower is the John K. Roth Professor of History at Claremont McKenna College and serves Acting Director of the Jack, Joseph and Morton Mandel Center for Advanced Holocaust Studies at the United States Holocaust Memorial Museum. Her book Hitler’s Furies: German Women in the Nazi Killing Fields examines how ordinary women participated in the Holocaust, and also how their participation has been systematically downplayed since the war. Professor Lower has been associated with the United States Holocaust Memorial Museum various roles since 1994. She was consultant for the special exhibit, Liberation 1945. She was awarded a fellowship by the Center for Advanced Holocaust Studies (1999), which was critical for the completion of her dissertation on the Holocaust in Ukraine. Dr. Lower was the Director of the Center’s Visiting Scholars Program from 2000 to 2004, and in this capacity mentored fellows and helped to shape the research agenda of the Center. From 2004-2007, she held a professorship at Towson University, in Maryland in the history department. From there, she moved to Munich, Germany, as a German Research Foundation Fellow at the Ludwig Maximilians Universität in Munich (2007- 2012). In Munich, Dr. Lower introduced several courses on the Holocaust, collected testimonies of perpetrators and bystanders, and successfully co-led an initiative to establish a federally funded German Center for Holocaust studies at the Institute for Contemporary History. She returned to the United States in 2012 to take up the John K. Roth Chair of History at Claremont McKenna and was also named the Director of the Mgrublian Center for Human Rights. She currently serves on the academic advisory board of Yahad-in-Unum (in Paris and is an editor of Dapim: Studies on the Holocaust. Dr. Lower is the author of Nazi Empire-Building and the Holocaust in Ukraine (2005), The Diary of Samuel Golfard and the Holocaust in Galicia (2011); and (with Ray Brandon) of Shoah in Ukraine: History, Testimony, Memorialization (2008). Her book, Hitler's Furies: German Women in the Nazi Killing Fields (2013) was a finalist for the National Book Award. 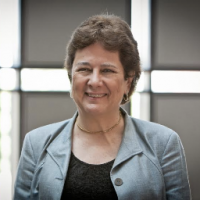 Victoria Barnett is the recipient of the National Catholic Center for Holocaust Education’s eighth Nostra Aetate Award, which acknowledges distinguished work in the field of Jewish-Catholic relations and, in particular, recognizes scholarship that enhanced interfaith understanding. Barnett is the Director of the Programs on Ethics, Religion, and the Holocaust at the United States Holocaust Memorial Museum. She is a graduate of Indiana University, Union Theological Seminary (New York), and George Mason University.  She is the author of “After Ten Years”: Dietrich Bonhoeffer and Our Times (2017); Bystanders: Conscience and Complicity during the Holocaust (1999); and For the Soul of the People: Protestant Protest against Hitler (1992). She has also translated several works, including Christiane Tietz’s Theologian of Resistance: The Life and Thought of Dietrich Bonhoeffer (2016); Wolfgang Gerlach’s And the Witnesses Silent: the Confessing Church and the Jews (University of Nebraska Press, 2000) and the revised edition of Eberhard Bethge’s Dietrich Bonhoeffer: A Biography (Fortress Press, 2000).  From 2004-2014 she served as one of the general editors of the Dietrich Bonhoeffer Works, the English translation series of Bonhoeffer’s complete works published by Fortress Press. She has written numerous articles and book chapters on the churches during the Holocaust.

Background: The Ethel LeFrak Holocaust Education Conference seeks to enhance Catholic-Jewish understanding by educating the educators.  The Conference will equip teachers and faculty members, especially those at Catholic institutions, to enter into serious discussions on the causes of antisemitism and the Holocaust, and to write and deliver papers that shape appropriate curricular responses at Catholic institutions and other educational sites.

Seton Hill University’s National Catholic Center for Holocaust Education (NCCHE) was established on the campus of Seton Hill University in 1987. Seton Hill initiated this national Catholic movement toward Holocaust studies in response to the urging of Pope John Paul II to recognize the significance of the Shoah, the Holocaust, and to “promote the necessary historical and religious studies on this event which concerns the whole of humanity today” (Letter to Archbishop John L. May, 1987).  The NCCHE has as its primary purpose the broad dissemination of scholarship on the root causes of antisemitism, its relation to the Holocaust and the implications from the Catholic perspective of both for today's world. Toward this end the Center is committed to equipping scholars, especially those at Catholic institutions, to enter into serious discussion on the causes of antisemitism and the Holocaust; shaping appropriate curricular responses at Catholic institutions and other educational sites; sustaining Seton Hill's Catholic Institute for Holocaust Studies in Israel through a cooperative program with Yad Vashem and the Isaac Jacob Institute for Religious Law encouraging scholarship and research through conferences, publications, workshops for educators, and similar activities; sponsoring local events on the Holocaust and related topics in the University and the community and enhancing Catholic-Jewish relations.