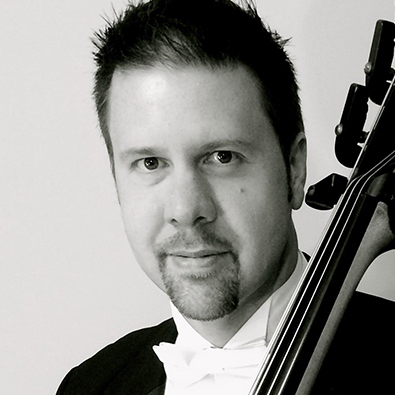 In high demand as both a performer and professor, Justin Bendel has quickly become one of Pittsburgh's most sought after bassists. Mr. Bendel attributes his career success to his musical versatility. Equally at home as an orchestral member, pit musician, soloist, and teacher, Mr. Bendel maintains a thriving, successful studio along side his full time career as a professional bassist. As a distinguished orchestral musician, Mr. Bendel is credited with performing with such groups as the Pittsburgh Symphony Orchestra, Canton Symphony Orchestra, Wheeling Symphony Orchestra, Erie Philharmonic, Youngstown Symphony Orchestra, and Akron Symphony Symphony, to name a few. In the spring of 2015, he was featured as a guest artist for the Pittsburgh Concert Chorale's 30th anniversary concerts. He has served as principal bassist numerous times, most notably for Mozart's Symphony #40 and for Verdi's opera Il Trovatore. His masterful technique and musicianship, in combination with his apparent natural aptitude and talent for the instrument, have brought him to the fore. His reputation for excellence has given him the privilege to be the bassist for some of our generation's biggest icons. In 2011, he completed the US east coast tour with Italian mega-star, Patrizio Buanne. He has also shared the stage with legends such as Christopher Parkening, Lynn Harrell, The Moody Blues, Al Jarreau, and the incomparable Ray Charles. Having played on every stage in the city, as well as countless others throughout the area, his musical theater credits are just as numerous. Most notably, with the CLO Cabaret Theater, he played 412 performances of the hit comedy Forever Plaid, Pittsburgh's longest running show to date. For nearly a decade he has been the house bassist for the Hillman Center's annual Campus Superstar, an "American Idol-style" scholarship singing competition. Through it all, musical theater work has been an opportunity for Mr. Bendel to not only showcase his diversity as a player, but also meet and collaborate with a vast group of talented musicians and artists. With sixty-nine musicals to this credit, he is no stranger to the music of broadway. With this experience, he was requested to work with such artists as Tom Rocco, Elaine Stritch, and Billy Porter. Also highlighting his versatility, Justin is active as a studio musician, having recently finished a project with the J McCall Band. The newly released Ebenezer is now available on iTunes. Besides studio recording, he can also be found playing jazz with the likes of RML Jazz, The Jeremy Fisher Trio, and with guitarist Rick Stuzzi in venues throughout the Pittsburgh area. With a multi-faceted career that has taken him to the most prestigious concert halls under the direction of world class conductors, Mr. Bendel's biggest achievement and honor was getting to play New York City's Carnegie Music Hall in 2013. This accomplishment was recently recognized by Jack Canfield, best selling author of the Chicken Soup for the Soul series. He hand selected Mr. Bendel's story and it was published in his newest book The Success Principals - 10th Anniversary Edition (HarperCollins). In 2015, he joined the faculty of Seton Hill University. He is currently the professor of Low String Methods as well as the Instructor of Double Bass.