As a high school senior, Toni Antonucci wanted to apply to Seton Hill. Her mother didn’t think it was a good idea.

“She said ‘I would not fit in’ and ‘it’s a college for wealthy girls,’ Toni says.

24 years later, Toni Antonucci turned down a full scholarship at a state school to earn her BSW at Seton Hill. In fall 2020, she’s returning to the Hill to teach in the Social Work Program.

Turns out, Toni and Seton Hill fit together perfectly. It just took them a little while to get together.

“The summer between high school and college I got pregnant to my high school sweetheart,” Toni says. “We married, he enlisted in the Navy, and we had two more sons. We moved 23 times and lived in 7 seven states.”

For 21 years, Toni worked part-time and raised her sons.

“Restaurant work and bartending are jobs that you can easily get in any town,” she says. “While bartending I realized that I was acting as a therapist to many of my regular customers.”

"I noticed that students from other universities found grad school to be more challenging than us SHU grads. We were well prepared and hit the ground running.”

Toni was still working as a bartender when she enrolled in Westmoreland County Community College, alongside her youngest son. She chose to pursue an associate’s degree in psychology.

“I was scared out of my mind my first semester,” she says. “Algebra was killing me. I was in tears.”

Her oldest son - who has physics degree - wouldn’t let her give up.

“I had homeschooled my boys for three years in the 90’s,” she says. “My son told me ‘ if you can teach me algebra you can do this.’ But boy, my math was rusty.”

Toni kept at it. Two years later, she had the honor of being one of the first community college students to present at the National Center for Undergraduate Research, where she won the USA Today Academic Team Scholarship. This scholarship could be used to pay tuition at any state school in Pennsylvania. 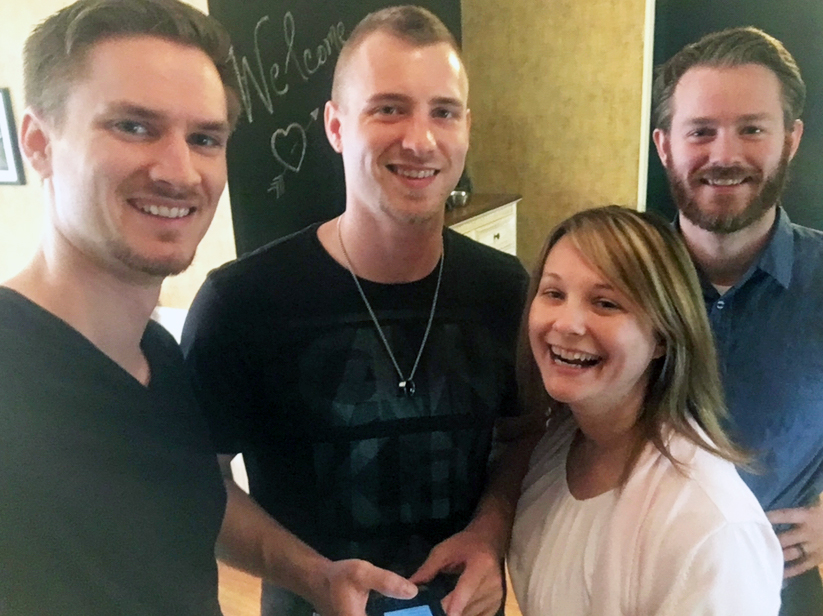 After earning her associate’s degree at WCCC, Toni decided to continue her education at a four-year college. Scholarship in hand, she looked into state schools. Her faculty advisor, Michelle Toohey, Ph.D., suggested that she also consider Seton Hill.

“I was hesitant because I still felt like SHU was out of my league,” Toni says. “Eventually, I applied, was accepted and learned that while I didn’t receive full tuition, Seton Hill was able to provide a partial scholarship. This, alongside PELL grants and student loans, made it possible for me to attend SHU.”

Around this time, a casual interaction would end up making a big difference in Toni’s life.

While she found her Seton Hill courses “rigorous and challenging,” she loved social work and earned her bachelor of social work degree in 2015.

“There are so many to choose from,” she says, “but my absolute best Seton Hill memory is walking across the graduation stage with all three of my sons cheering me on at the top of their lungs.”

Toni continued her education at the University of Pittsburgh.

“SHU prepared me beyond measure for grad school,” she says. “I noticed that students from other universities found grad school to be more challenging than us SHU grads. We were well prepared and hit the ground running.”

Toni earned her master’s of clinical/medical social work at Pitt, where she also completed a certificate in integrated healthcare. After becoming a licensed social worker, she worked for two years at Mental Health America of Southwestern PA as director of development. She then moved to Strive Health of Greensburg, where she served in a clinician and community liaison position specializing in treatment of addiction to drugs and alcohol.

“Let me say that I didn’t want anything to do with working in the addiction field until it hit home,” she says.

Toni was still in grad school when she discovered that her youngest son was struggling with an opioid addiction.

“I began to question everything I knew,” Toni says. “He helped me understand substance use disorder and the process of addiction more than any textbook could. In grad school I only took one addiction course. And every night I would discuss the course with my son in an attempt to learn as much as I could to help him and other families just like us.”

“Coming back to SHU to teach is a dream come true,” she says. “Not only am I coming home to a university that 30 plus years ago was deemed to be ‘beyond my reach,’ but I’m coming home to teach - and to teach about addiction. My son, Gary Demetre Josebeck who passed away at the age of 26 from an overdose (July 4, 2018) was a recovery artist, activist and advocate. I carry his memory and his passion with me in everything I do.”

Photo: Toni with her three sons.