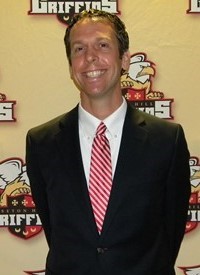 Katarski’s honor comes as the Griffins earned the No. 5 seed in the PSAC Tournament. The team has made the postseason in all four years under Katarski’s direction, finishing fifth after a seventh-place preseason ranking.

Katarski’s team improved from 14 wins to 16 wins, marking the first time under his direction that Seton Hill finished better than .500 in the league and overall.

“Mark Katarski has shown tremendous leadership and has inspired excellence in his team both on and off the court,” said Mary C. Finger, Seton Hill University President. “Mark’s teams have not only made the PSAC playoffs four straight years, but they have posted the highest GPA among all women’s basketball teams in the conference each year.  And, with Mark, these young women affirm the Seton Hill mission by continuing to participate in service initiatives that benefit the community-at-large. On behalf of the entire Seton Hill community, I congratulate Mark on this well-deserved Coach of the Year honor.”

“Mark has done a wonderful job with Seton Hill’s women’s basketball program, and this Coach of the Year honor demonstrates his commitment,” said Chris Snyder, Seton Hill Executive Director of Athletics. “Mark embodies what it means to be a great coach. His care for his student-athletes, this University and this community make him truly deserving of this honor.”

"To be recognized by my fellow coaches in the conference is quite humbling," Katarski said. "This award is a direct reflection of the extraordinary efforts of our players and assistant coaches, as well as the support of the faculty, staff, and administrators at Seton Hill University. I am privileged to coach a tremendous group of women who serve as excellent examples of what it means to be a student athlete."

Katarski’s teams have seen success off the court as well. For three straight seasons, the Griffins have earned the highest team GPA among all PSAC women’s basketball teams. The team has also placed as high as third in the Women’s Basketball Coaches Association Division II Top 25 Academic Honor Roll.

The Griffins have also been active in community service under Katarski. His teams have hosted special games for local elementary school students, held fundraisers for Breast Cancer charities and mentored basketball players from Clelian Heights School for Exceptional Children.

He and his wife, Hadara, live in Hempfield Township with their daughters Jaela and Mara.