Seton Hill University will launch a co-ed varsity Esports team next fall that will provide incoming and current students the opportunity to participate in video gaming tournaments against college players from across the country.

“Seton Hill University is pleased to announce that Esports will join the university’s highly successful athletic programs starting in the Fall of 2022,” said Mary C. Finger, Ed.D., Seton Hill president. “We are excited to offer yet another avenue for students to showcase their talents – this time in the gaming arena – and Griffins Esports demonstrates Seton Hill’s commitment to offering dynamic and innovative programming for our students.”

“The popularity of Esports on high school and college campuses – as well as on the professional level – cannot be understated, and all of us at Seton Hill look forward to providing students the opportunity to compete at a high level,” said Chris Snyder, Executive Director of Athletics at Seton Hill. “We anticipate that our Griffin Esports competitors will soon join our other athletic teams as national contenders on the collegiate level.”

“Seton Hill’s strong academic programs in technology majors – including computer science, cybersecurity and data science – will certainly draw interest to participation in Esports, but there are students from all majors who enjoy gaming and have strong skills that will lend themselves to compete in Esports at Seton Hill, said Brad Messner, Computer Science Instructor and Department Coordinator, who is serving as faculty coordinator for the launch of Griffins Esports.

Seton Hill will build a gaming arena in the lower level of Canevin Hall for the Esports program. The 875-square-foot arena, which will feature 16 PC gaming stations and multi-level seating with multiple monitors for viewing is expected to open at the end of next year.

Seton Hill expects to compete in at least five game titles at program launch, including Overwatch, League of Legends, Rocket League, Hearthstone and FIFA Soccer. Titles may change or be added based on player interest and skill levels.

Scholarship opportunities will be available for incoming students based on both their gaming skills and their academic qualifications. The university anticipates an initial roster of 25 students, which will grow based on student interest. 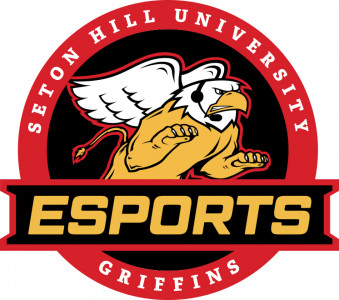 Seton Hill expects to join the National Association of College Esports (NACE) in January in preparation for the launch of the Griffin Esports program in Fall 2022. NACE is the largest member association of college and university varsity Esports programs that promotes the education and development of students through intercollegiate Esports.

Images: Renderings of the planned Griffins Esports Arena provided by architect EwingCole of Pittsburgh and the Griffin Esports logo.