Seton Hill students, faculty and staff took part in a series of events on March 14 to join with students, teachers and allies at high schools and colleges across the country participating in the National School Walk Out in remembrance and response to the mass shooting at Marjory Stoneman Douglas High School in Parkland, Fla. and to the victims of gun violence. 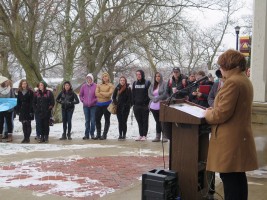 More than 200 members of the Seton Hill community gathered on the lawn of the Administration Building at 10 a.m. for a 17-minute ceremony, which included brief remarks by President Mary C. Finger and student organizer Mark Nealon, a prayer led by Sister Maureen O’Brien, Director of Campus Ministry, and a walk to Sullivan Lawn on the Seton Hill campus.

Student leaders carried signs listing the names of people killed in school and college shootings during the walk. 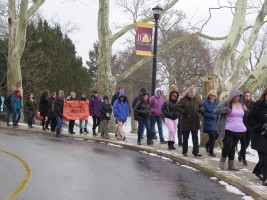 The community also had the opportunity to write letters or emails to their legislators on issues around school violence and mass shootings and able to sign a banner of support that will be sent to the students of Marjory Stoneman Douglas High School. 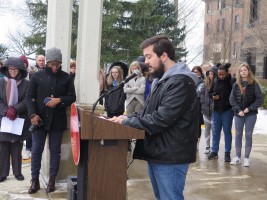 “Seton Hill University's mission as a Catholic, Setonian university fosters civil discourse and supports peaceful protest on issues that promote the sanctity of human life and the dignity of every person,” said Seton Hill President Mary C. Finger. “These events support Seton Hill’s efforts as a liberal arts institution to educate students to think critically, creatively and ethically and engage in meaningful dialogue to develop solutions to complex problems.”