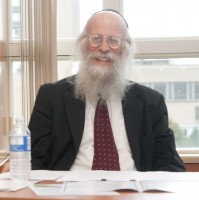 What: The National Catholic Center for Holocaust Education (NCCHE) at Seton Hill University will host a lecture on the life and work of Elie Wiesel by noted Holocaust literary scholar Avraham (Alan) Rosen. The lecture, which is free and open to the public, is part of the Eva Fleischner, Ph.D. Endowed Fund Lecture Series.

Who: Dr. Avraham (Alan) Rosen is the author or editor of twelve books. He is most recently the author of The Wonder of Their Voices: The 1946 Holocaust Interviews of David Boder and Sounds of Defiance: The Holocaust, Multilingualism and the Problem of English; and the editor of two National Jewish Book Award finalists Elie Wiesel: Jewish, Literary, and Moral Perspectives and Literature of the Holocaust.

He was a research fellow of the Fondation pour la Mémoire de la Shoah from 2006-2009. He has also held fellowships at the Center for Advanced Holocaust Studies, the United States Holocaust Memorial Museum; the International Institute for Holocaust Research, Yad Vashem; the Katz Center for Advanced Jewish Studies, University of Pennsylvania, and the Archives for the History of American Psychology, University of Akron.

In 2013, he served as the Wilkenfeld Scholar in Holocaust Education in Sydney, Australia. He has taught at universities and colleges in Israel and the United States, and lectures regularly on Holocaust Literature at Yad Vashem’s International School for Holocaust Studies and other Holocaust study centers. Recent lecture venues include Yale University, the University of Pennsylvania, and a keynote address at a Leeds University conference on “Jewish Exile and the Arts.”

Born and raised in Los Angeles, educated in Boston under the direction of Elie Wiesel, he lives in Jerusalem with his wife and four children. He has just completed his book manuscript, “Keeping Time Sacred, Making Time Holy: The Holocaust’s Jewish Calendars.”

Background: Dr. Rosen’s lecture, “To Capture the Fire: The Life and Work of Elie Wiesel,” which explores a theme central to many of the Nobel Peace laureate’s works, that of becoming a “soul on fire.” Dr. Rosen will discuss how capturing the fire becomes a means of transforming the evil of the Holocaust—and, in the end, transforming our world as well.

In addition to the public lecture, Dr. Rosen will be speaking to Seton Hill University classes throughout the day on February 7.

The National Catholic Center for Holocaust Education (NCCHE) was established on the campus of Seton Hill University in 1987. Seton Hill initiated this national Catholic movement toward Holocaust studies in response to the urging of Pope John Paul II to recognize the significance of the Shoah, the Holocaust, and to “promote the necessary historical and religious studies on this event which concerns the whole of humanity today.”   The NCCHE has as its primary purpose the broad dissemination of scholarship on the root causes of anti-Semitism, its relation to the Holocaust and the implications from the Catholic perspective of both for today's world. Toward this end the Center is committed to equipping scholars, especially those at Catholic institutions, to enter into serious discussion on the causes of anti-Semitism and the Holocaust; shaping appropriate curricular responses at Catholic institutions and other educational sites; sustaining Seton Hill's Catholic Institute for Holocaust Studies in Israel through a cooperative program with Yad Vashem, the Isaac Jacob Institute for Religious Law and Hebrew University; encouraging scholarship and research through conferences, publications, workshops for educators, and similar activities; sponsoring local events on the Holocaust and related topics in the University and the community and enhancing Catholic-Jewish relations.