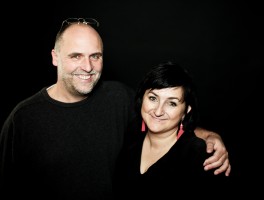 What:  Seton Hill University will host a guest lecture by German author and journalist Uwe von Seltmann titled “The Future of the Past: A Family Research Project that Resulted in the Bestselling Book ‘Gabi i Uwe.’” The lecture, which is free and open to the public, is co-sponsored by the Seton Hill University National Catholic Center for Holocaust Education and Classrooms Without Borders.

Background: In July 2006, German journalist Uwe von Seltmann met Polish artist Gabriela Maciejowska in Krakow, Poland. The two fell in love, but soon realized that the past is not past but connected them in a fatal way: Uwe’s grandfather was an SS-man during World War II in Krakow, while Gabriela’s grandfather was murdered by the Nazis in Auschwitz. The stories of both grandfathers were held as taboo within their families. The couple’s common research led them to remote areas and displaced times - and became more and more a journey into themselves. They discovered that only those who know the past can shape the future as the poet Hermann Hesse said: “Anything that has not been suffered and solved to the end will return.”

Uwe von Seltmann will share the story of his and Gabi’s journey to discover their families’ histories and themselves, which led to the publication of the book “Gabi i Uwe” in this free public lecture co-sponsored by the Seton Hill University National Catholic Center for Holocaust Education and Classrooms Without Borders.

The National Catholic Center for Holocaust Education (NCCHE) was established on the campus of Seton Hill University in 1987. Seton Hill initiated this national Catholic movement toward Holocaust studies in response to the urging of Pope John Paul II to recognize the significance of the Shoah, the Holocaust, and to “promote the necessary historical and religious studies on this event which concerns the whole of humanity today.”   The NCCHE has as its primary purpose the broad dissemination of scholarship on the root causes of anti-Semitism, its relation to the Holocaust and the implications from the Catholic perspective of both for today's world. Toward this end the Center is committed to equipping scholars, especially those at Catholic institutions, to enter into serious discussion on the causes of anti-Semitism and the Holocaust; shaping appropriate curricular responses at Catholic institutions and other educational sites; sustaining Seton Hill's Catholic Institute for Holocaust Studies in Israel through a cooperative program with Yad Vashem, the Isaac Jacob Institute for Religious Law and Hebrew University; encouraging scholarship and research through conferences, publications, workshops for educators, and similar activities; sponsoring local events on the Holocaust and related topics in the University and the community and enhancing Catholic-Jewish relations.

Classrooms Without Borders (CWB) is a non-profit educational organization founded in February 2011 by Dr. Zipora Gur in association with the Jewish Federation of Greater Pittsburgh. CWB envisions itself as the premier provider of experiential, extended term professional development for teachers in the metropolitan Pittsburgh region.  CWB offers unique travel experiences enriched with rigorous content, scholarly readings and direct application to classroom instruction. CWB connects teachers and learners through customized professional growth programs that result in positive changes in the way teachers instruct students.