Spanish major Nick Young had been looking forward to traveling to Argentina in May 2020 with his Seton Hill classmates and professors. Then the pandemic put a stop to international travel.

“We were devastated when the study abroad trips were canceled,” says Debra Faszer-McMahon, Ph.D., professor of Spanish and Dean of the School of Humanities. “Yet - while studying abroad is obviously an incredible opportunity - students can get authentic immersive experiences close to Seton Hill as well.”

To find an alternative to study abroad for Spanish majors, Seton Hill’s Spanish Program faculty reached out to professional colleagues at local organizations that support Spanish-speaking youth and families in and around the region.

“I have worked with the Latino Community Center and SOY Pittsburgh in the past and knew they did great work in Pittsburgh,” says Dr. Faszer-MacMahon. “I collaborated with them for a virtual service event last spring term, and this fall we worked with them again for an in-person service experience. They love Seton Hill students and when we reached out about getting Nick involved as a regular volunteer, they were very excited.”

Supporting Our Youth (SOY) Pittsburgh is a program of Pittsburgh’s Latino Community Center.  It runs elementary and middle-level bilingual afterschool programs to support Spanish-speaking students in Pittsburgh Public Schools. As Nick plans to become a Spanish teacher, it was a great fit for him. First, though, he had to make the mental pivot from studying abroad in Argentina to teaching in Pittsburgh.

“The kids were in middle school and all learning English as a second or third language,” Nick explained. “My teaching coordinator Amanda was great, and she taught me a lot about being in the classroom. The first few weeks were a little challenging. But after bonding with them it became a very rewarding experience.”

To connect with his new students, Nick leaned heavily on what he’d learned in his Spanish and Spanish-Education courses at Seton Hill.

“I got the opportunity to teach class by myself a few times and found myself remembering little tidbits from my education classes as I was teaching. For example, each day had a different sort of designation as to what we would be doing. This year every Tuesday was a computer coding class. As you can imagine this was challenging for middle schoolers, but it was also challenging for me to translate weird and obscure words about computer coding in Spanish.”

Since study abroad courses were canceled in 2021 as well, Nick became more deeply involved with SOY Pittsburgh and the Latino Community Center.

“The most rewarding aspect of my time with SOY Pittsburgh was certainly the connections I made with the kids, and being able to directly see that impact learning outcomes,” Nick says. “Being engaged with them academically usually required some sort of semi-personal engagement. Getting a laugh was often a segue to learning as it can be challenging to get middle schoolers to pay attention. After weeks and weeks of sharing a few laughs and talking with them, you feel relatively connected. This manifests positively in different ways, but it can be as simple as them responding to a look after challenging behavior instead of what previously took a five-minute conversation.  In the end, as my time was wrapping up, I was sad to leave.”

While Dr. Faszer-McMahon will continue to lead study abroad trips in the future (when it’s safe to do so), she couldn’t be happier with the experience Nick received through SOY Pittsburgh.

“I was able to observe Nick interacting with students in the SOY Pittsburgh program in early November, and Nick was in his glory,” she said. “He worked with two students after school to create a digital story in Spanish, and all three of them were laughing and writing and chatting in Spanish for over an hour. They created a co-authored story titled “Los animales de la naturaleza y el mar” [“The Animals of Nature and the Sea”] and I have to say the story is hilarious. It was such a joy to watch Nick use his language skills to help Spanish-speaking boys feel motivated by learning and pushed to be creative and to develop writing skills in their native language. I can't wait to see how Nick continues to use his gifts and talents in the future.” 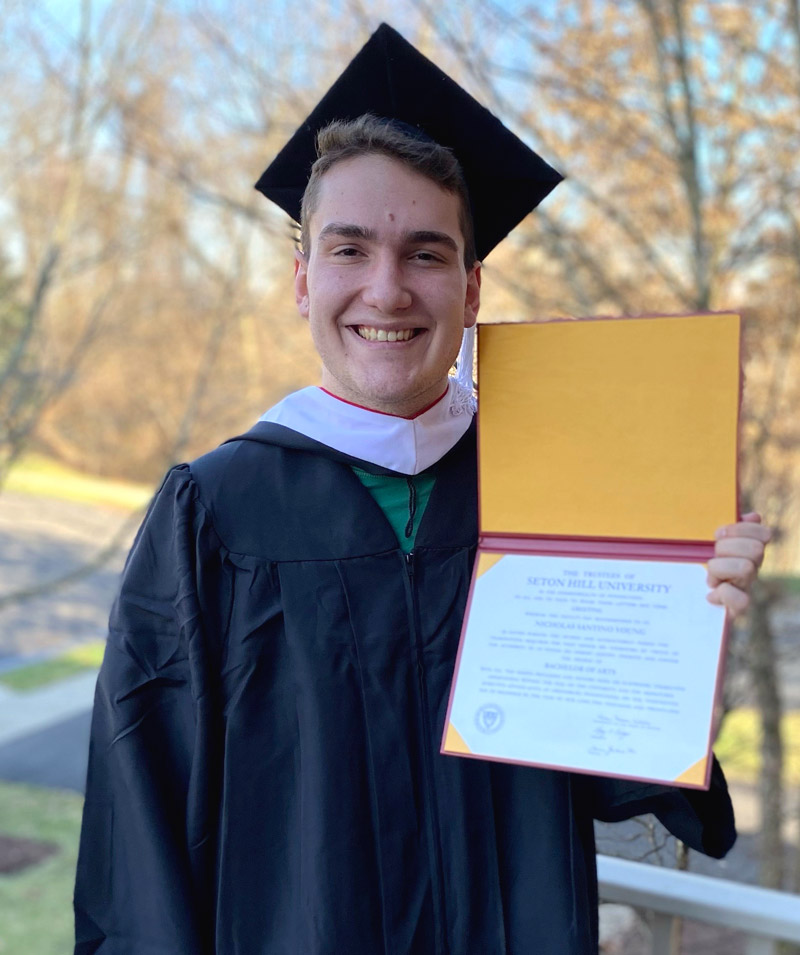 Nick graduated from Seton Hill in December with a B.A. in Spanish and the academic requirements to earn his teaching certification. He’s ready to move forward and glad he chose Seton Hill.

“I chose Seton Hill because it was a great fit. The location and smaller atmosphere was perfect for me. I have nothing but great things to say about my experiences with both my professors and peers … my experiences at Seton Hill only furthered my desire to teach Spanish.”

Learn More About the Spanish Program at Seton Hill