A Sabbatical in Horror 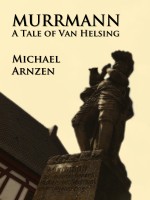 Michael Arnzen, Ph.D., professor of English and writing popular fiction at Seton Hill, returned to teaching this fall after enjoying a yearlong sabbatical. During his time away, Arnzen continued to teach graduate courses online and in residencies, while traveling, writing and soaking up inspiration.  One source of inspiration was a visit with his wife to see her family in the small town of Geiselwind, located between Nuremburg and Munich in the woodlands of Bavaria.

While enjoying the visit, Arnzen revisited a quirky old statue in the middle of town that fascinated him: a stone statue of a Swedish general named "Murrmann" that commemorates the village's survival during the Thirty Years War.  The statue is curious; it depicts General Murrmann - a foreign soldier - hoisting a sausage up in the air, with a cat sitting atop his shoulder.  During his trip, Arnzen learned more about the statue’s history: after a lengthy battle, Murrmann claimed he would take over the city by sundown, "as surely as I can eat this sausage." At that precise moment, a cat mysteriously jumped over his shoulder and snatched the food right out of his hand.  Seeing this as a bad omen, the General and his troops withdrew from the battle.

"The whole thing is kind of like fan fiction for classic literature."

This quirky legend - combined with his re-reading of Bram Stoker's classic novel “Dracula” and his experience talking with Germans while visiting Geiselwind - inspired Arnzen to write a new horror story. “Murrmann: A Tale of Van Helsing” is a novelette that serves as a sequel to the famous vampire story. Written in a Gothic style that combines classic "urban legend" elements with contemporary horror conventions, the story features the legendary statue and other local color as a backdrop.

"The whole thing is kind of like fan fiction for classic literature. I used the Murrmann tale as an allegory in the story, and developed an idea I had a little while ago about a plot hole in ‘Dracula,’" Arnzen reports.  "I not only looked into what happened to the famous vampire hunter after the original novel ended, but resurrected another character who was left for dead in Stoker's book and dropped them both into Geiselwind."

Arnzen decided to self-publish the book as a way to develop his skills and update his knowledge of ebook publishing. The cover art draws from a photograph he took during his travel, and he's planning to produce an audiobook soon.

"I never would have done all this without SHU's support.  Having the sabbatical gave me time to travel and soak up inspiration, as well as freeing me up to write and learn how to produce the whole package myself.  I know a lot of what I did during sabbatical will find its way into my classes, and help me in the year to come, in advising the campus literary magazine, ‘Eye Contact.’ "

“Murrmann: A Tale of Van Helsing” is currently for sale on amazon.com and getting 5-star reader reviews.

Arnzen, along with Seton Hill’s Writing Popular Fiction M.F.A. Program director, Nicole Peeler, Ph.D., will also be co-curating an academic panel next May at the International Vampire Film and Art Conference, to be held in historic Transylvania, Romania.

Arnzen is a veteran horror author, with four Bram Stoker Awards and an International Horror Guild Award on his shelf, next to dozens of his books of poetry, short story collections, anthologies and novels.  “Proverbs for Monsters,” a "best of Arnzen" story collection, is being updated for re-release in a 10th anniversary edition, and he is putting the final touches on his academic study of The Popular Uncanny for publication this winter.  He has taught genre fiction in Seton Hill's Hill’s Writing Popular Fiction M.F.A. Program as well as in the English-Creative Writing major since 1999.