One of Seton Hill University’s strengths is its School of Visual and Performing Arts, which includes programs in the fine arts, music, dance and theatre. Over the years, the NCCHE has partnered with all of the above programs to educate both the region and the campus community about the Holocaust.

"From Darkness to Light" Mosaics Exhibit

We began the fall 2022 semester by hosting the Greater Pittsburgh premiere of "From Darkness to Light: Mosaics Inspired by Tragedy". The exhibition, which was influenced by the Pittsburgh Tree of Life Synagogue shooting, was displayed in the Seton Hill Arts Center from August 29 to September 30, 2022.

A gallery talk and reception, attended by more than 100 people, took place on September 11. Speakers at the program, pictured from left to right, were David Kalla, President Mary C. Finger, Ed.D, Dr. Lauren Bairnsfather, Susan Ribnick, and Dr. James Paharik. We are thankful for the sponsorship of The Westmoreland Museum of American Art, the David and Barbara Kalla Fund, and the Holocaust Center of Pittsburgh, which made our exhibition possible."From Darkness to Light" Mosaics Exhibition

David Rullo of the Pittsburgh Jewish Chronicle published an article about the exhibition, which can be accessed here. The gallery talk was also recorded and the video can be viewed on the Center’s YouTube channel or by clicking this link. 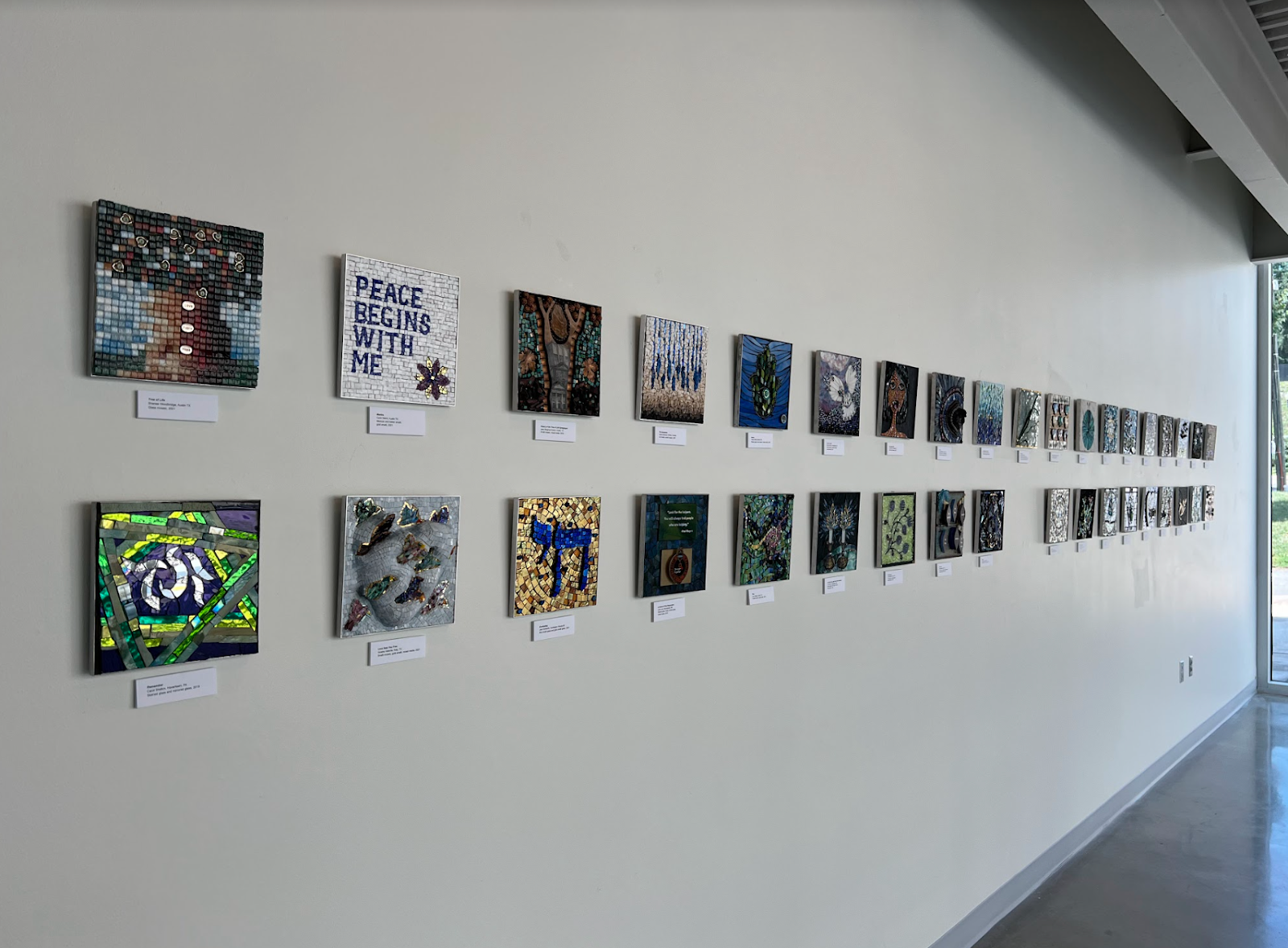 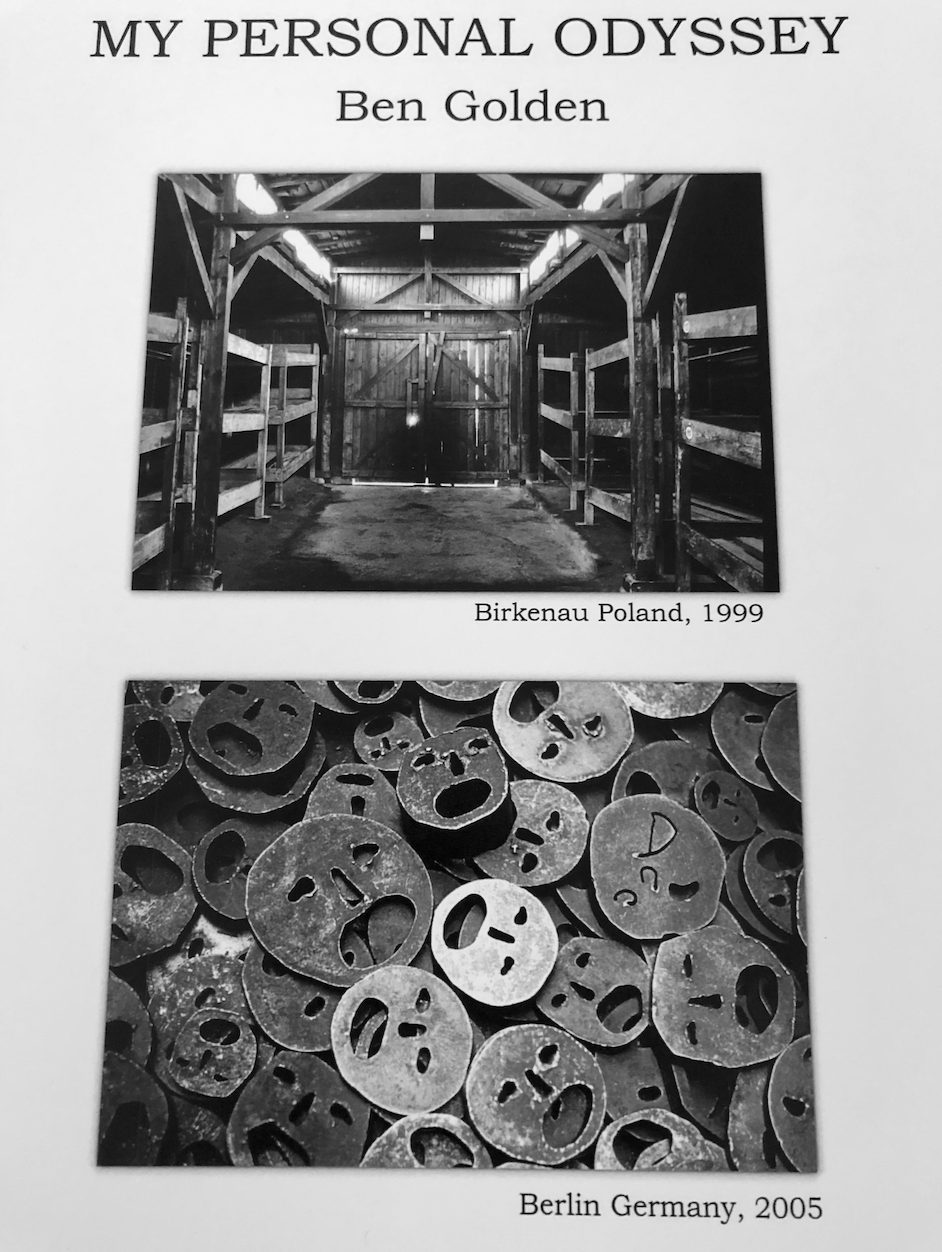 The National Catholic Center for Holocaust Education is the repository of a series of photographs by Ben Golden. Golden’s work has been published in various journals, including in Leica Magazine, and exhibited at various venues, including at the Chicago Cultural Center, Temple Sholom Synagogue in Chicago, and the Jewish Federation in South Bend, Indiana.

The two collections of Golden’s work at our Center depict Holocaust sites in Poland and Germany. The first exhibit details his 1999 experience in Poland, where he visited the death camps of World War II. This exhibition is an artistic look at how the past horrors of the country in such places as Auschwitz can coexist with modern day life in Poland. The second exhibition, finished in 2005, focuses on Golden’s trip to the German capital of Berlin. This exhibition is another outstanding reflection on the Nazis and World War II’s influence on a present day nation.

While Golden’s exhibitions would be valued surely anywhere in the world, they certainly resonate with the National Catholic Center for Holocaust Education at Seton Hill University. These exhibits illustrate the Center’s mission, which is to teach about the Holocaust and other forms of genocide, to counter antisemitism wherever it may be, and to facilitate Jewish-Catholic understanding. Golden’s generous donation and impressive artistic exhibits are a valuable addition to our Center.

In addition to his photographic collection, Mr. Golden also wrote a book entitled My Personal Odyssey in 2017. This work narrates his time throughout his travels in Europe, along with the photographs he captured along the way. Copies of the book are available by contacting us at ncche@setonhill.edu

Perhaps the best example of a collaborative program with the Arts is the Question Mark/er Project, which began in 2009 and is ongoing. This project has produced a series of permanent art works around the campus, as well as banners crafted by graphic design students and an installation that is housed in the Center. These works have been created by Seton Hill art faculty and students in response to questions that members of the Seton Hill community have asked about the Holocaust -- questions such as “What is the role of good people in difficult times?” and “Why do we love silently, but hate openly?” The project has engaged the entire Seton Hill campus in asking questions, and in then “making history visible” by creating works of art around these questions. The Question Mark/er project has been supported by the Seton Hill arts faculty as well as by local artists such as Diane Samuels, who created a Holocaust memorial in Grafeneck, Germany, and is the co-founder of City of Asylum, an organization that provides sanctuary to artists fleeing persecution in their home countries.

The 1987 opening of the National Catholic Center for Holocaust Education (NCCHE) at Seton Hill University was marked by the planting and dedication of the Peace Tree on the campus, a symbolic presence of the work being done by the Center. As it grew, so did the work of educating about the Holocaust. However, in 2006 the Peace Tree was severely damaged by lightning, and subsequently removed. This unfortunate incident gave rise to The Question Mark/er Project, an ongoing effort at Seton Hill to integrate the arts, history, current events and the study of genocide in an interdisciplinary manner, and to again symbolize the presence of the NCCHE on Seton Hill’s campus.”​ 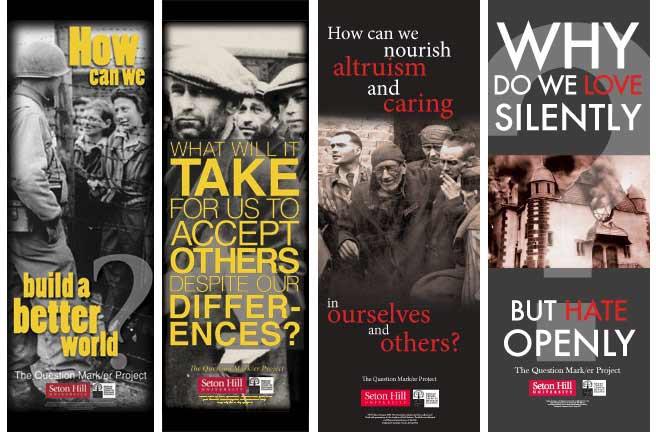 Four students in Sister Mary Kay Neff’s Graphic Design Class created Phase III as a series of banners in spring, 2012. The banners respond to these four questions: “Why do we love silently but hate openly?”—“What will it take for us to accept others despite our differences?”—“How can we build a better world?”—“How can we nourish altruism and caring in ourselves and others?” The banners won first prize for graphic design in Seton Hill’s Fall 2012 Student Show in Harlan Gallery and were displayed during The Ethel LeFrak Holocaust Education Conference, October 21-23. Carol Brode also wrote in Learn. Teach. Prevent: Holocaust Education in the 21st Century; “ We envision the project to be ever-expandable: it could occur year after year, accumulating numerous markers that each would ask a different question; the project markers could be literary- or performance-based as well as visual; and the openness of the project can be adapted to function in any community. The resulting memorials/markers could be created by an individual or group, artists or non-artists, children or adults, and could be permanent or temporary. It involves all of us in creating memorials that make history visible in a way that is meaningful in the present, and we welcome others to create their own Question Mark/er projects. 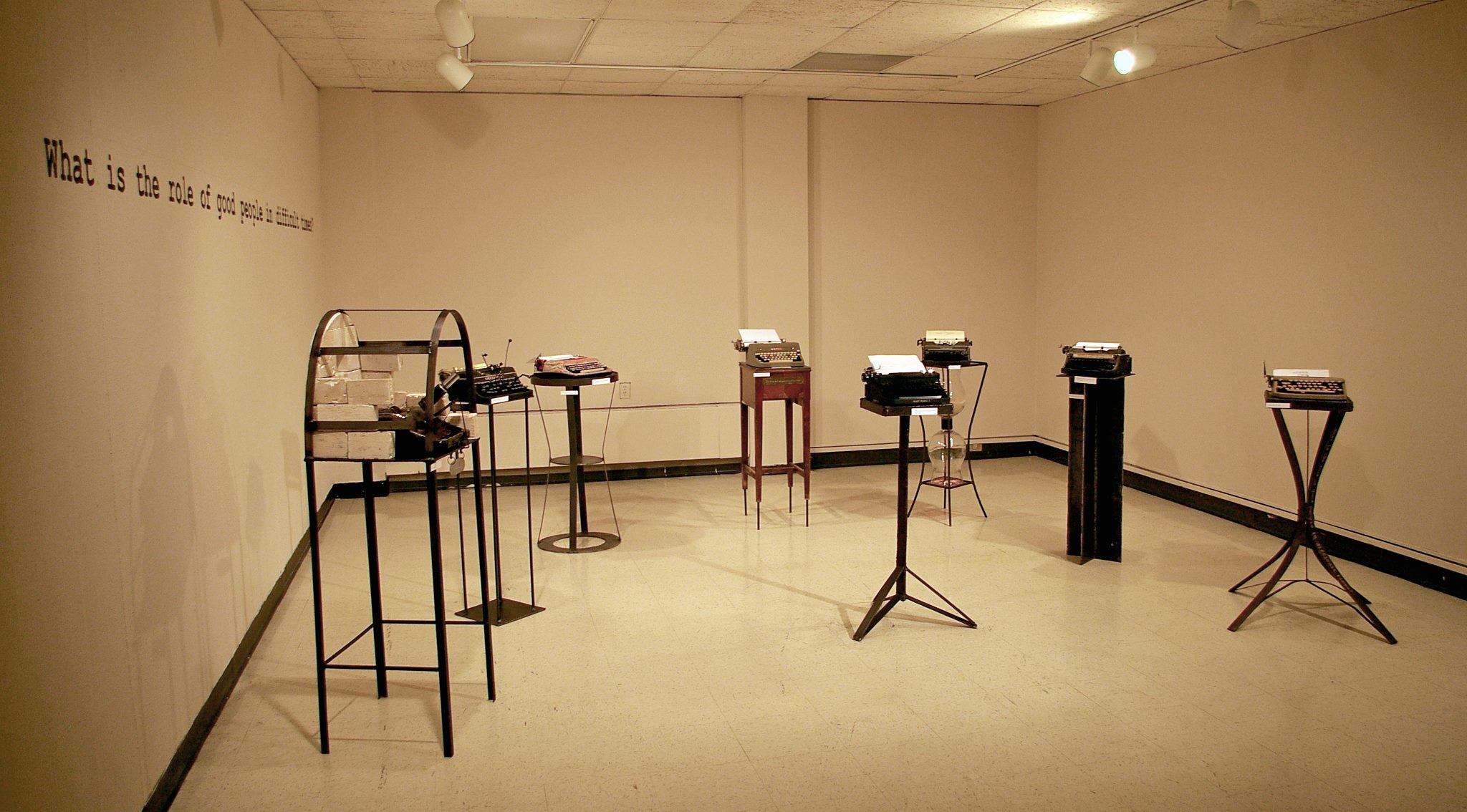 Art Faculty Carol Brode and Pati Beachley along with Artist and then NCCHE Advisory Board Member Diane Samuels, who created a Holocaust memorial in Grafeneck, Germany, discussed creating a new memorial on campus, as “a way to make history visible.” But, they also wanted to “promote discussion about history, the present, an individual’s role in shaping the present and the future.”

The result was The Question Mark/er Project. In spring 2009, NCCHE interns conducted brief presentations in several classes and collected questions about the Holocaust and genocide. Later that spring, Pati Beachley’s Advanced 3D Media Class created the interactive Typewriter Exhibit in response to the question “What is the Role of Good People in Difficult Times?” In 2010, Carol Brode created Phase Two of the project in response to the question “Will you speak if your voice is in the minority?” Her project consisted of a garden and etched glass panel installed outside the university’s Lynch Hall. 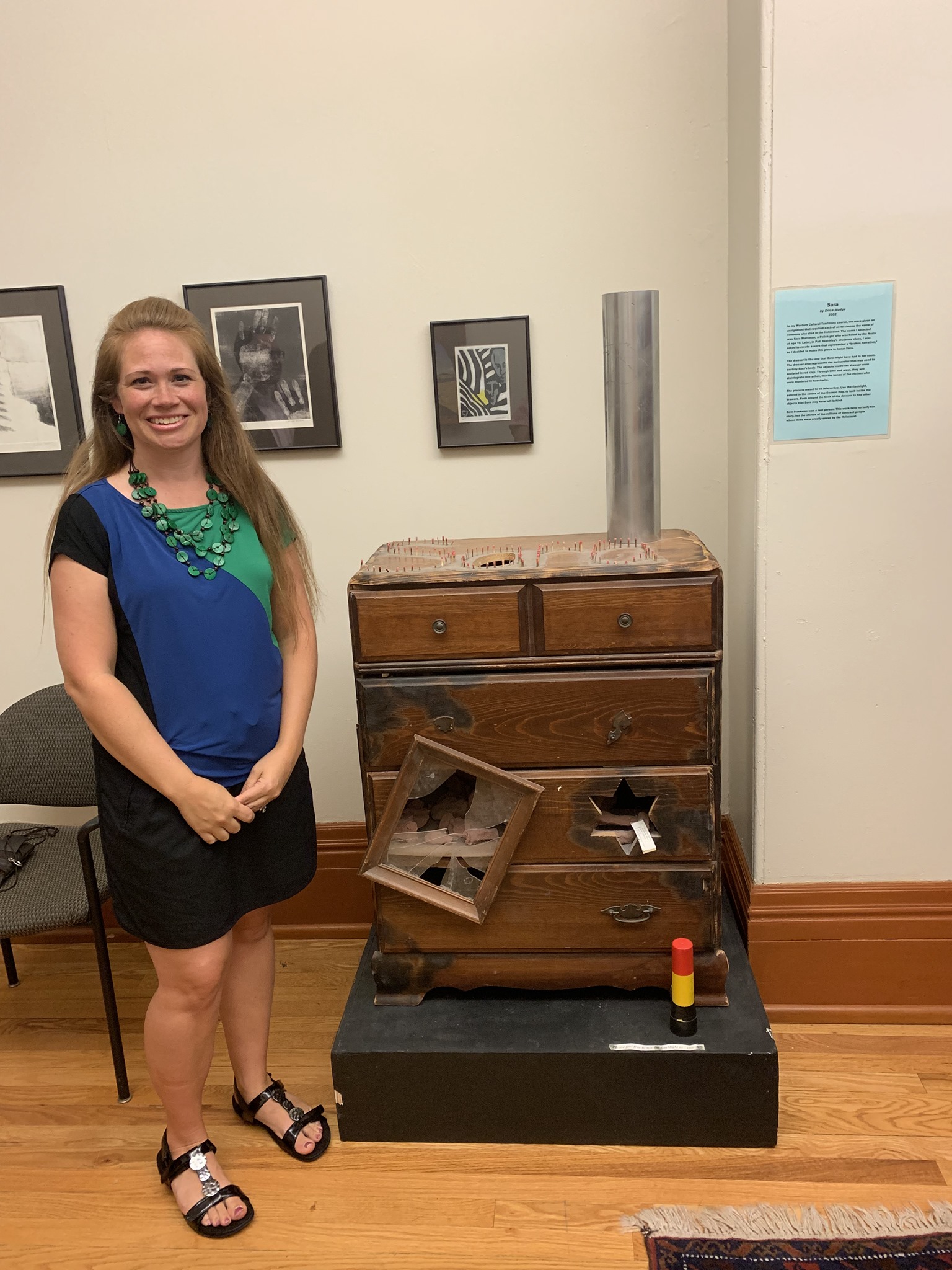 "Sara" was created by a former Seton Hill art student Erica Mudge-Jordan (pictured) in 2002 as a memorial to Sara Starkman, a Polish girl who died in Auschwitz at the age of 19, in 1942. The dresser is typical of the sort of furniture that a girl might have had in her room. But the artist has transformed this seemingly harmless, everyday object in order to tell the story of Sara's death.

The shattered window represents the Nazi attack on Jews during Kristallnacht, the Night of Broken Glass. The matches on top of the dresser, along with the smoke stack, symbolize the ovens at Auschwitz. Inside the dresser, in the top drawer, are cuttings of hair (when prisoners arrived at Auschwitz, their heads were shaved). In another drawer, you find the blackened pages of a book, recalling the Nazi book burnings. And in the bottom drawer are bones made of clay that represent Sara's final remains.

The sculpture is interactive, designed to engage the viewer. The drawers can be opened, and a flashlight is provided to explore the hidden recesses of the cabinet. The piece is at once a memorial to a specific person and an educational work about the Holocaust. Through learning about Sara's story, viewers also learn, by implication, about the millions of other innocent victims, many of them young people, who were killed by the Nazis.

Memoirs of the Holocaust: Printed Images

In 2005, Seton Hill University alumna, Melissa Trecaso (pictured below), produced works in a printmaking course taught by Professor Carol Brode. At the beginning of the semester, Melissa and her classmates were asked to choose a central theme for their prints, and she chose the Holocaust. Melissa believes that her prints represent what victims may have witnessed first hand. She reveals that she did not focus on the story of any one victim; rather, she wanted to express her interpretation of the tragedies and horrors experienced by millions. 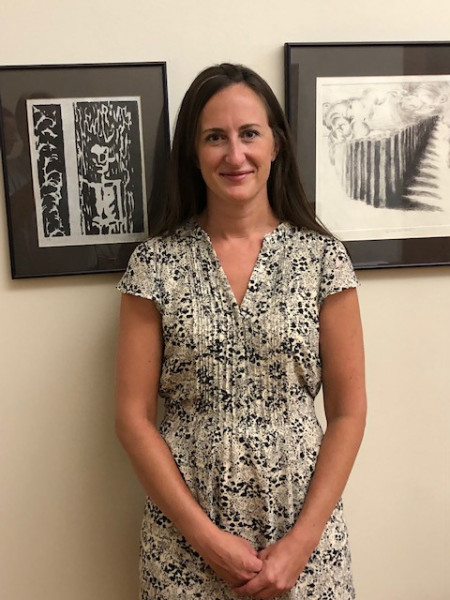 It is her hope, that as you view these prints, you will place yourself in the shoes of a victim. She also hopes that, as you look at these works, you will feel a sense of compassion for all of the many people today who are suffering from violence and oppression in our world.

Contact the National Catholic Center for Holocaust Education by email, or by calling (724) 830-1033.